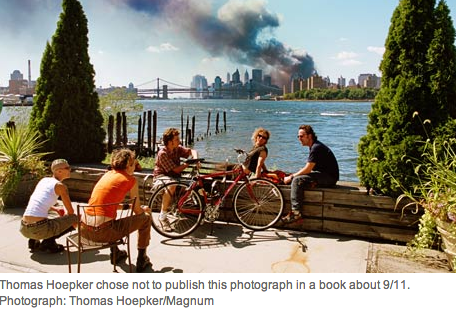 This was published one year ago. What are your thoughts on the state of patriotism in our country today – 13 years later on September 11th?

I remember saying to 007 shortly after 9/11 that as Americans, we all suffer from Attention Deficit Disorder and would likely soon forget what this day meant.  In particular, I thought those who did not live in New York City, Pennsylvania or DC, would forget quicker. 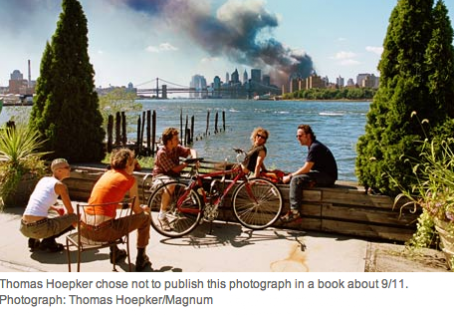 This photo by Thomas Hoepker was published in 2006, five years after the horrific event.  I’m sure the people in this photo wish it would go away, as it has been a topic of controversy since it’s publication.  Regardless of the emotions that this picture may or may not have captured from a park in Brooklyn; can this photo represent the disorder I mentioned?  Or are the people here merely in shock and taking advantage of a front row seat out of harms way?

My purpose in posting this today is just to stoke the embers of our hearts and cause us to remember those burning buildings, the Pentagon, a field in Pennsylvania and the attack on Benghazi – to name a few.  Americans continue to die at the hands of terrorists.   Why do we not remain outraged?  Are we that forgetful?  Or are we truly self-absorbed as some have said?

I don’t want to believe that as Americans, all that matters is that we receive the next paycheck, have a yearly vacation, and a house on main street, USA. I know that patriotism runs deep in some.

I am thankful that I live the American Dream every day of my life.  My uncle and my dad served in order for me to live this way. People abandon their lives in other countries, risk their lives and yes even break our laws in order to come here.  What have we sacrificed?  We get bored when the national news focuses too long on one subject. Does the soul of our country no longer matter?  Are we now more dedicated to our football teams than we are to our country? Or is our dedication just represented in different ways than it was a generation ago?

I do not pretend to have the answers to these questions, but they are on my mind on this beautiful September day. A day not too different from 2001.

I’m proud to be an American where at least I know I’m free.
And I won’t forget the men who died, who gave that right to me.
And I’d gladly stand up next to you and defend her still today.
‘Cause there ain’t no doubt I love this land God bless the U.S.A. ~ Lee Greenwood