My daughter and a sweet family friend came for a brief visit over the weekend. We decided to head to the beach on Friday, which was Spring Break for those who had beat us to the beach that day. It was sunny, in the 60’s with 13 mph winds, so a bit chilly. 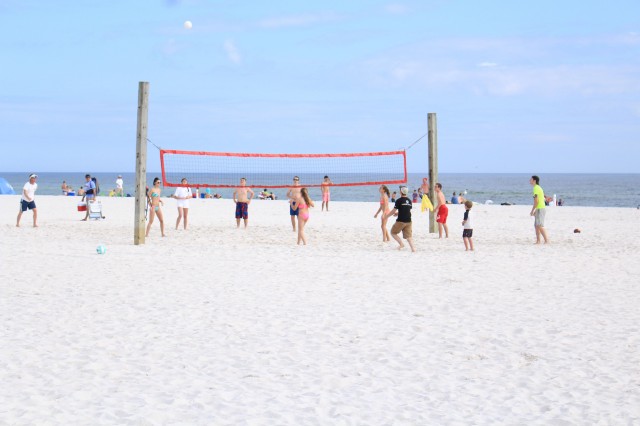 But, we set up our chairs anyway. We had a cooler with water, soft drinks and a few Raz- ber- Rita’s.  The goal was a little fun with a cocktail on the beach in the late afternoon.

It was about 2:00 in the afternoon when everybody within 30 yards of us noticed the same thing. There was a group of “spring breakers” not too far from us, who’s “fun” had started much earlier in the day. They had no idea how cool the weather was or how brisk the wind was blowing.

One blonde girl in an orange bikini couldn’t stand up. She literally would try to walk with her group of friends down the beach and her knees would buckle and she would fall flat on her face. I’m talking sand-spitting, eyelashes full of sand, nose-blowing-sand kind of falling on her face. After several attempts and hard surface failures, she finally dug herself a hole in the sand to “sleep it off” and we (several folks on the beach were watching this) thought she was down for the count.

But, no, she would sit up, throw up, and then lay back down. What was shocking about all of this to me is what happened next. I have never in my whole life seen anyone this intoxicated. It brought to mind visions of alcohol poisoning, comas and death. And then, the scariest thing of all happened.

Her “friends” brought out a bag (you know the kind that comes in a bucket of margaritas or a wine box that normal people use for entertaining a crowd?), and cut a hole in it and placed it in her mouth. I told my daughter and her friend that I felt like I was watching a suicide or a murder. I didn’t know which.

I wanted to get a lifeguard, call the police or at the very least, have a heart to heart with her drunken friends, but I was instructed not to get involved. Let me add this tidbit. I am not a prude. I indulge in an adult beverage myself now and then. We had them in the cooler. I have (unfortunately) been tipsy a time or two, but this was different. This was scary.

We watched one “knight in drunken stupor” try to help her. He made her crawl with him (he was able to walk) toward the parking lot. I didn’t see them hit the pavement, but I couldn’t help but wonder what type of head injury was waiting if she tried to walk to a car. We also discussed what might have happened to her physically with this guy if he were “less than honorable”. The whole thing was sickening.

We didn’t see them anymore. Her group quickly forgot about her and continued to party hard on the beach.

My thoughts are this, don’t think for a minute that the crowd you are with will help look after you. Don’t think that someone’s got your back if you have one too many. Don’t depend on others for your sobriety. It just may be more likely that they’ll think it’s more fun to watch you fall on your face, than to prevent your suicide or at the very least, the sand-burn on your face.

Sobriety is a jewel
That I do much adore;
And therefore keep me dancing
Though drunkards lie and snore.
O mind your feet, O mind your feet,
Keep dancing like a wave,
And under every dancer
A dead man in his grave.
No ups and downs, my pretty,
A mermaid, not a punk;
A drunkard is a dead man,
And all dead men are drunk.

If there is ever a next time, I will speak up. I’m the adult and would want someone to help prevent this from happening to one of my children if needed. It may not have done any good, but then I wouldn’t be stuck with this guilty hangover of not doing anything.