For my daddy’s recent 80th birthday, I took him on a trip down memory lane. He grew up in Ragland, AL and so for his birthday, we took a drive to his hometown. We started out with a favorite lunch from our hometown favorite, Cafe on Main, in Trussville, AL. 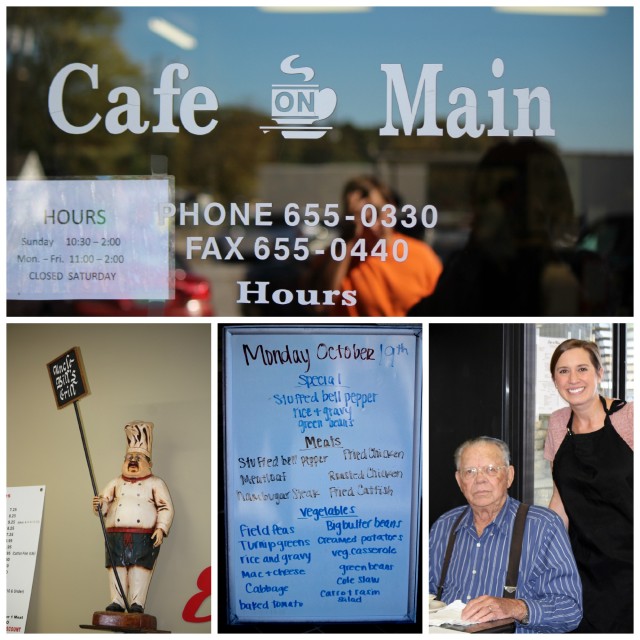 This restaurant has been in Trussville for nearly 15 years. It is a local favorite for a meat ‘n’ 3, a place to meet and greet and get a delicious sweet tea to go. After our lunch, we headed up the road to Ragland. I wish we’d had a convertible to enjoy the beautiful weather, but rolling down the windows and opening the moonroof was the next best thing. 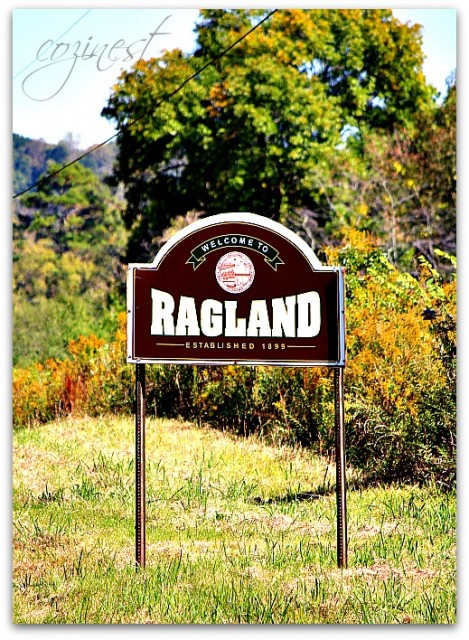 Nicknamed “Goose” after Reece Tatum of the Harlem Globetrotters, my daddy was a star basketball player during his days at Ragland High School. Daddy has long arms and big hands and to hear others tell it, he had a wicked hook shot. He would dazzle the spectators at the games, especially in 1954 when they won the District Championship. 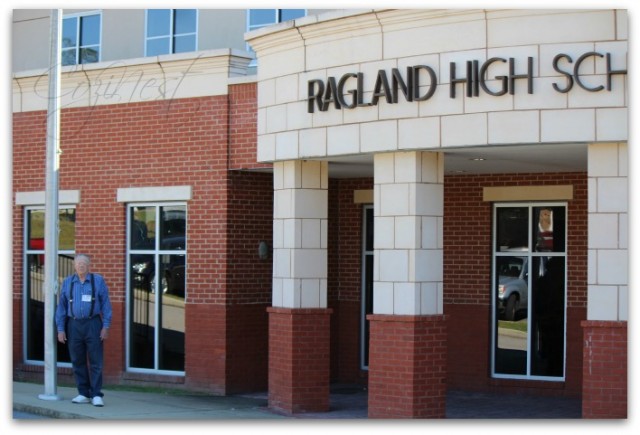 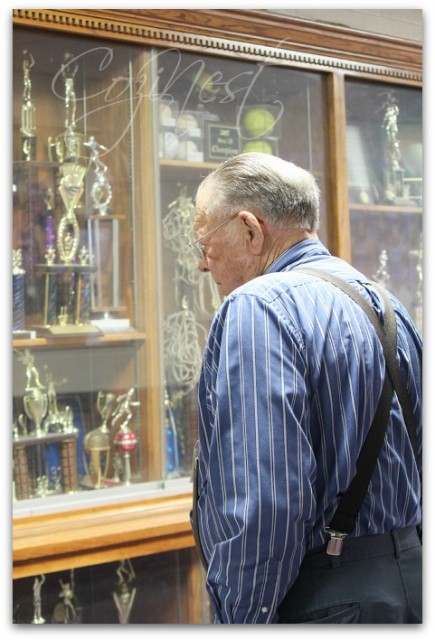 Coach George Eden gave him this nickname during practice and now years later, on my daddy’s 80th birthday, we stood in the hallway of Ragland High School talking with the present coach of the Purple Devils. His name is Coach Andy Eden and he is the son of the coach who dubbed my daddy, “Goose.” 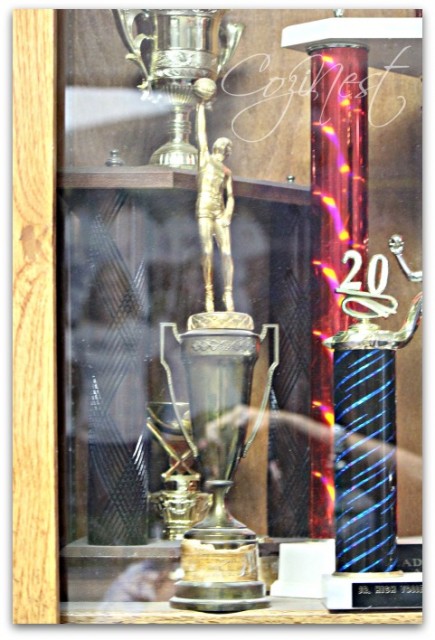 “I didn’t go to sleep with average bedtime stories like most boys my age,” Coach Andy Eden told me, “I knew your dad long before I ever met him.” His dad had told him sports stories at bedtime and some of those stories were all about “Goose.” 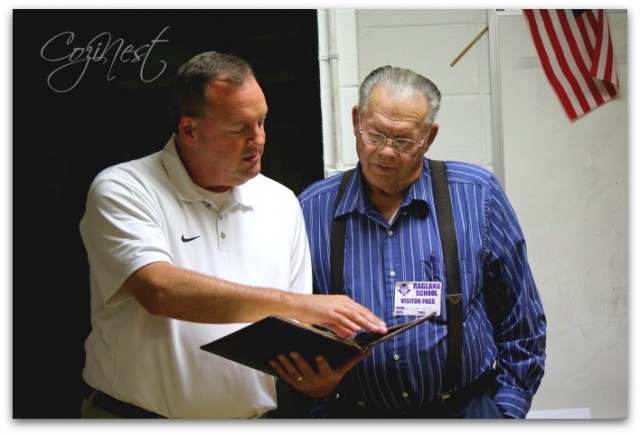 Coach Eden was kind enough to find a yearbook from Daddy’s class and showed him pictures from his school days.

Daddy tells one story that regardless of age or memory, he will never forget. He was sitting in History class with a group of boys and they were “throwing spitballs.” I tried to correct him, asking “Didn’t you spit balls through a straw?” “No,” he insisted, “Back then we just wadded them up and threw them at each other.” 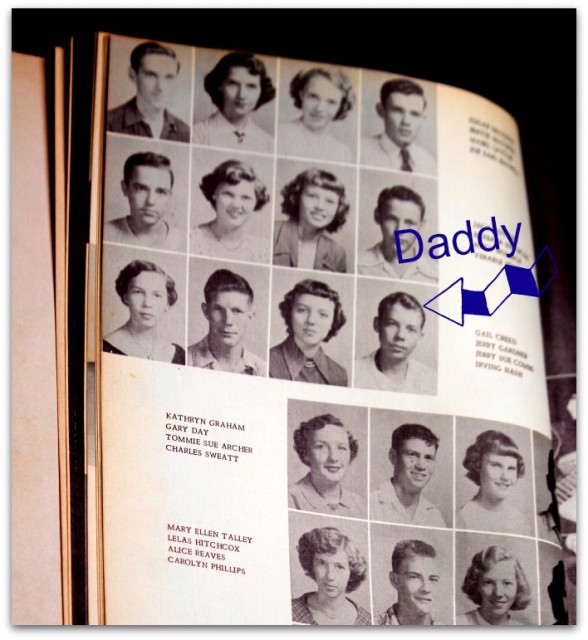 He had just made one he described as the size of a baseball and lobbed it across the room toward a fellow classmate when the door opened and in walked the coach. If he hadn’t ducked, the projectile would have hit him square in the face.

The coach then launched into an inquisition trying to determine which student had spewed this missile across the room. There was no discussion about germs or hygiene. The waste of paper or saving the planet didn’t come up, either. With the threat of the bell ringing and no student giving him up, Dad and the entire class were then lined up and chastised soundly by the coach and his paddle. He said as far as he knew no one ever told who had thrown the spitball. “That was back in the day when adults were trusted to discipline each other’s children,” Daddy added. “I also knew that when word reached my papa about the whipping that I would get another one when I got home. It would be worse than the one at school. I never threw another spitball.”

To this day, when Daddy talks about his days on the basketball team, it is with the utmost respect for Coach Eden. He loved his coach. He knew he deserved that spanking, but “hates it that everyone else got paddled, too.” I reminded him that his classmates must have had a keen liking to him not to give him up. He just grinned.

We decided to take the scenic route through his hometown on this particular day and we were so glad we did. The leaves were just beginning to turn and as we rounded each curve, we were greeted with a memory long since forgotten. As Daddy talked about his childhood, he would comment on the “old Wilson place”, the church where his family had dinner on the grounds, or the Harris’ home. 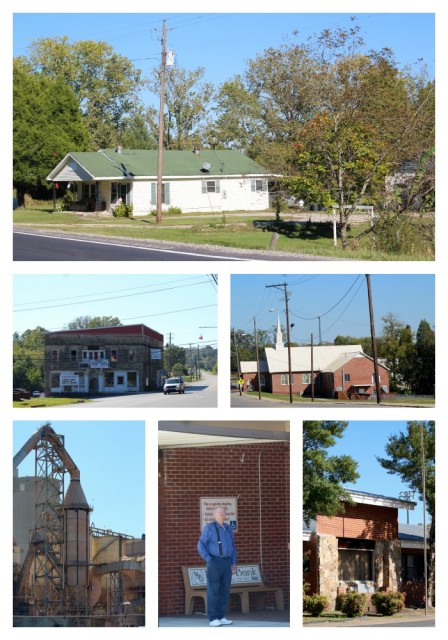 As we drove around one corner a boarded up building came into view and I said, “Look Daddy, that looks like the general store where Papa used to take me for an Orange Crush and a candy bar.” “It is,” he answered, “But it was Pope’s General Store back then.” 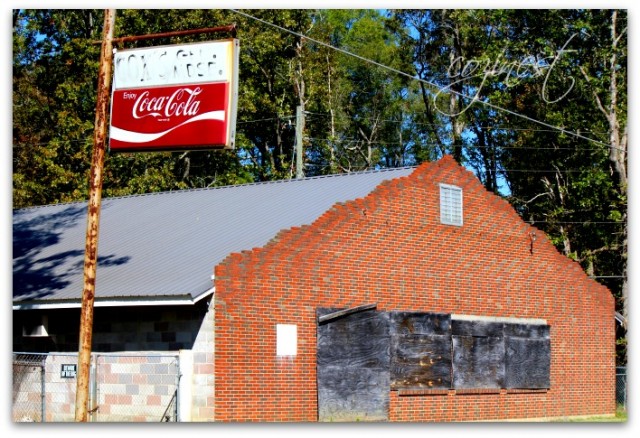 I could feel the back of my legs getting cold just thinking about it. Papa would drive me to the store in his Rambler and after I chose my “belly-washer” and candy, he would plop me down on top of the Coca-Cola cooler and we’d have our very own private “talk”. Just me and Papa. It remains one of my very favorite memories. Papa didn’t talk much, kind of like Daddy. He was more of a listener. I remember him asking me, “how life was treatin’ me” and then I did most of the talking. I wish I had listened more. As I walked around the building, taking pictures, I strained to hear his voice and longed for an Orange Crush. I thought how ironic. The building with such a strong memory is now boarded up. I wanted to go inside and sit on the cooler again, bare legs and all. (I was always in a dress at that age.) I wanted to stand at the counter waiting on Papa to pay 10 cents for my drink and get chocolate all over my fingers that he would wipe off with a handkerchief.

Today we’d call that handkerchief a bandana. It occurred to me that children no longer stop here on their way home from school. Gas isn’t pumped into old Ramblers. Papa’s don’t listen to tales of playground mishaps or crying little sisters in this building anymore. There were no sounds, except a barking dog warning his owners that a crazy woman was having a moment across the street. 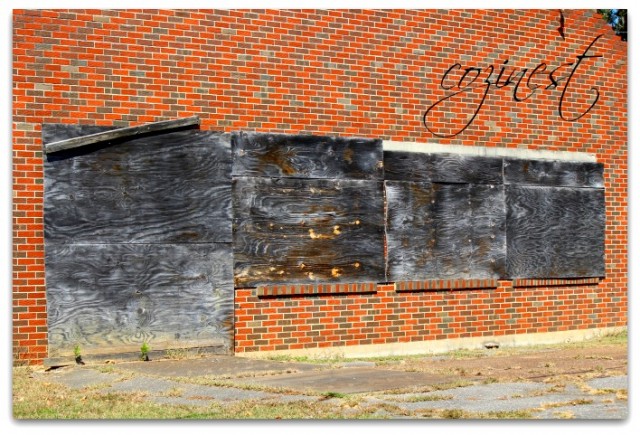 When I got back in the car and we drove toward the house where Daddy grew up, he told me about he and a friend hitchhiking through St. Clair County one night after trying to see some girls in Pell City. They walked a long way back to Ragland and sat down to rest on “twin bridge” and fell asleep. When his friends’ sister sped across the bridge in the family car later and nearly ran them over, they had a story to tell their friends for years to come. They were not upset about nearly getting killed. They were mad that she didn’t stop to pick them up.

I couldn’t help but wonder if kids still have stories like this to tell. I reminded him that my kids would have been scared to death to hitchhike and if they’d been out late enough to fall asleep on a bridge, the sheriff would have likely been their ride home. This mama would have been in a panic. It was a better time then.

I know there aren’t many “home-steads” anymore that are referred to by the owners’ name. Now we live in subdivisions and houses are bought and sold over and over again. It’s rare to have your home known as the “Wilson place.”

As we turned a curve, Daddy urged me to keep my eyes open because a special place was coming up on the right side of the road. 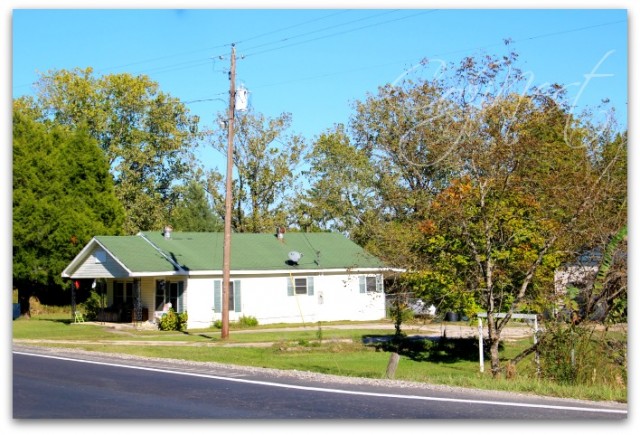 It hadn’t changed much; it was simple house with green shutters and a front porch. The rocking chairs were replaced with a worn out couch, and there was no swing, but there was still a screened door and the door I remembered walking through to see my papa. As we walked around the house, I knew this was suppose to be a trip for my sweet daddy, who’s long term memory is still as sharp as a tack, but who sometimes forgets things more recent these days. It was turning into my own walk down memory lane with the man of my dreams. I knew at that moment that this would become my new favorite memory. 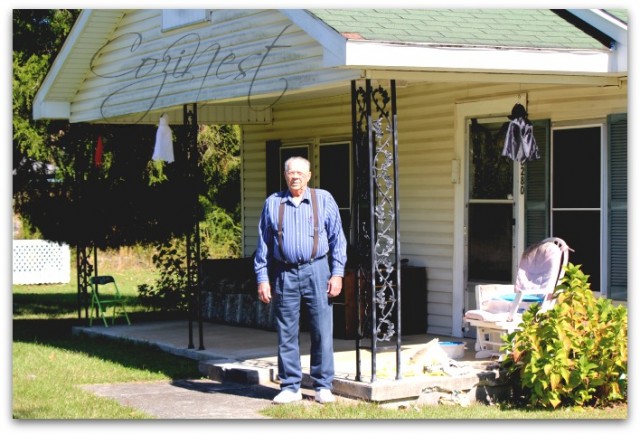 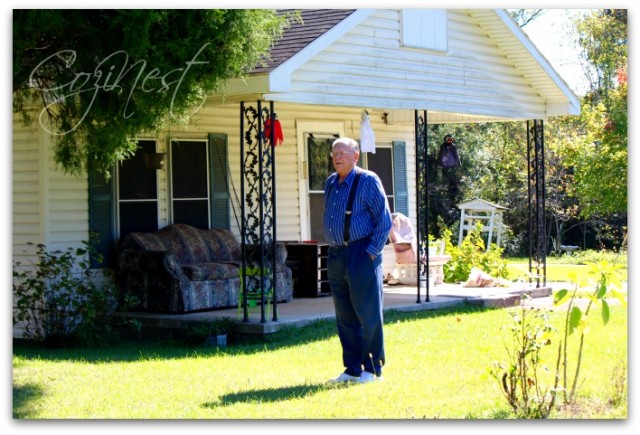 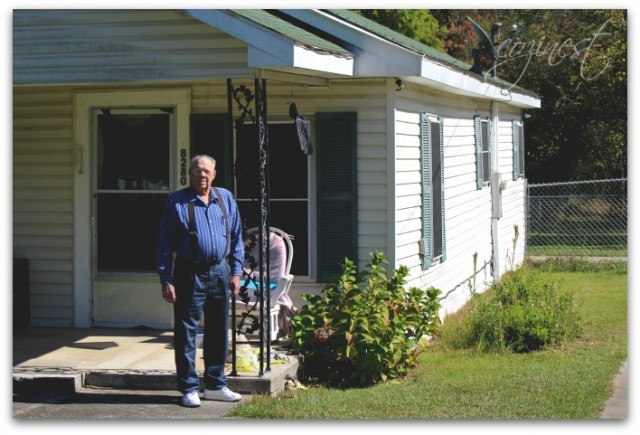 We walked around reminiscing about the old well, the outhouse, (indoor plumbing didn’t arrive at this house until late in the 60’s), and Papa’s garden in the backyard. 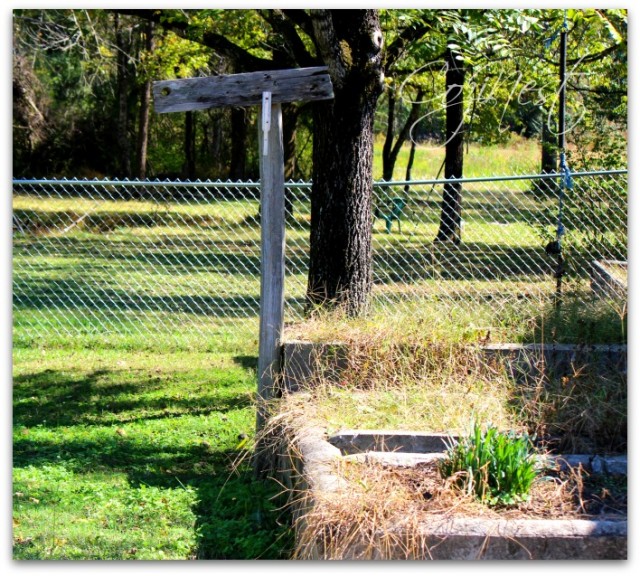 The garage where his old Rambler was parked housed an SUV, owned by the current residents of the old homestead. Luckily, the house is still owned by family members and we were able to say hello. My daddy’s niece’s grandson and wife now live there with their new baby. It may not be the Nash place anymore, but it’s still in the family. Five generations have lived in that house now. A house first owned by a cement worker who ran away from an abusive family somewhere in Tennessee at the age of 10. 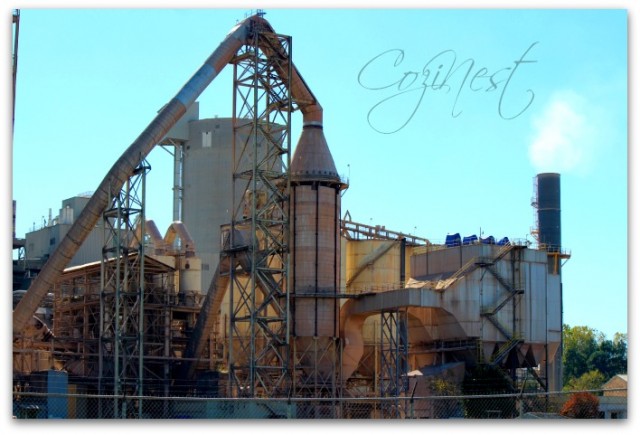 He raised his own family and while he may not have spared the rod, there is no doubt of the love he had for his children and this grandchild. 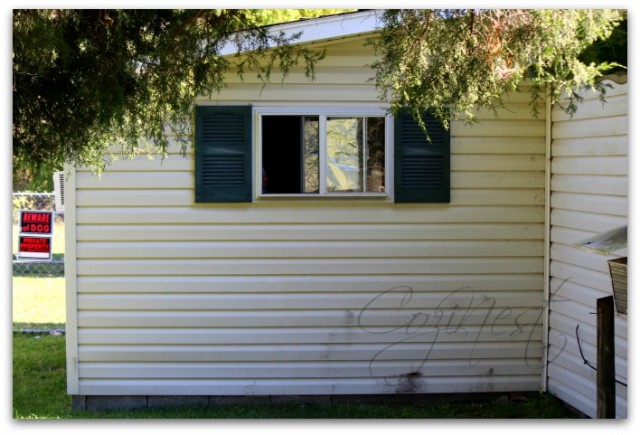 This addition was built later and became not only my daddy’s bedroom, but later when I would visit in the summer, it was the room where I slept. 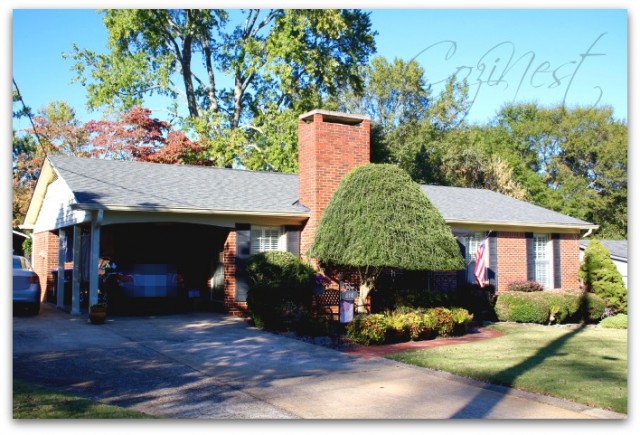 We stopped at a gas station out near the interstate and got a couple of diet cokes for the ride home. They didn’t have Orange Crush. 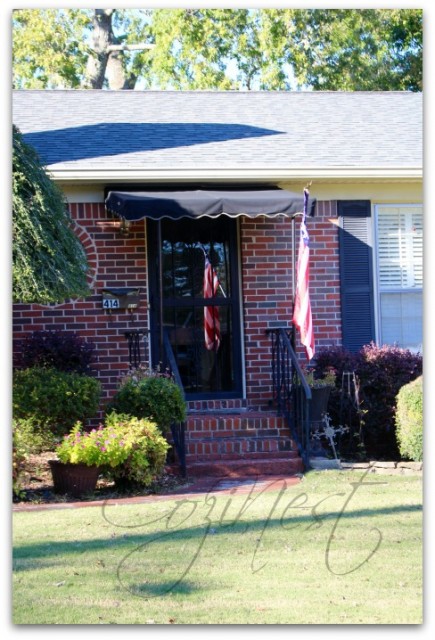 I dropped Daddy off at our Nash Family home. The window on the far right in the top picture was my bedroom growing up. 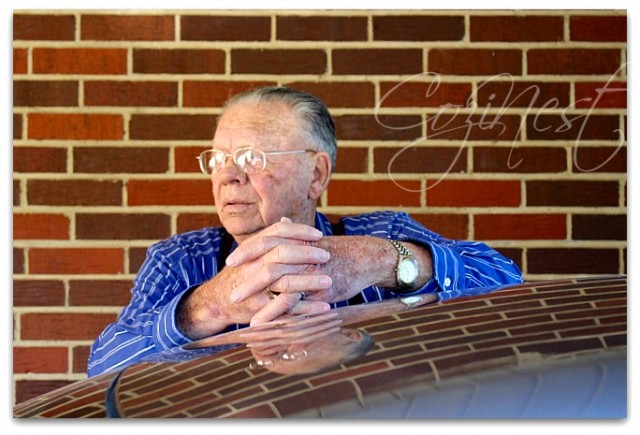 Daddy always walks me out when I get in the car to leave. Most of the time, he holds his hands just like this as he says, “I love you, Babe.”

He reminds me so much of Papa. Oh, to have 80 more birthdays like this one.