In honor of Good Friday, last weeks’ Fashion Friday is published on Monday this week. According to the LA Times, a traditional celebration is changing. An annual gathering at Lotta’s Fountain in San Francisco will continue to mark the surviving victims of the 1906 earthquake and fire, but, with a new focus. Because there are so few known survivors of the quake now, the new focus will be to celebrate period clothing from that era that survived the disaster. The following is an example of what that might look like. 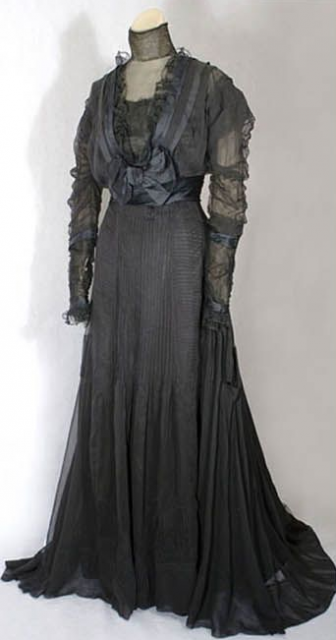 These styles were absolutely beautiful. Many were made of silk and it would be my guess that most were handmade, including the lace. To say that each dress was a work of art, is a major understatement. The article from the LA Times has unearthed a desire in this fashionista wannabe to see some of these dresses in person. Someday, I just might get to do just that! A gown and evening coat have been discovered and were unveiled at the anniversary Friday morning. To see pictures of this historic fashion moment visit this site.

According to the LA Times, efforts are now being made to find 2 dozen or so garments to display in a San Francisco campus gallery of the Fashion Institute of Design & Merchandising to commemorate the April 18th, 1906 survivors. If you know of anyone who might have an ensemble for man, woman or child from San Francisco in 1906, “Kevin Jones, historian and curator for the Los Angeles-based Fashion Institute of Design & Merchandising,” and Wilkes Bashford of Union Square – San Francisco – will be overseeing the project.

“The annual commemoration resumes before dawn Friday — the anniversary of the temblor and fire — when hundreds will likely gather on Market Street at Lotta’s Fountain, a re-creation of the original landmark that served as a bulletin board for the displaced.”

If you need an idea of what the style of the day was back then, take a look at my 1900’s Dress Pinterest Board.

Yesterday was proclaimed in San Francisco,

“April 18, 2014 …. is earthquake remembrance day throughout the realm” and  “all San Franciscans …should prepare for the next great temblor, which is sure to come.”

While I hope I’m not there during the next temblor, I would love to see the collection once it’s in place. Girls’ road trip, anyone?

This post may also be seen today at  http://www.lechateaudesfleurs.blogspot.com/