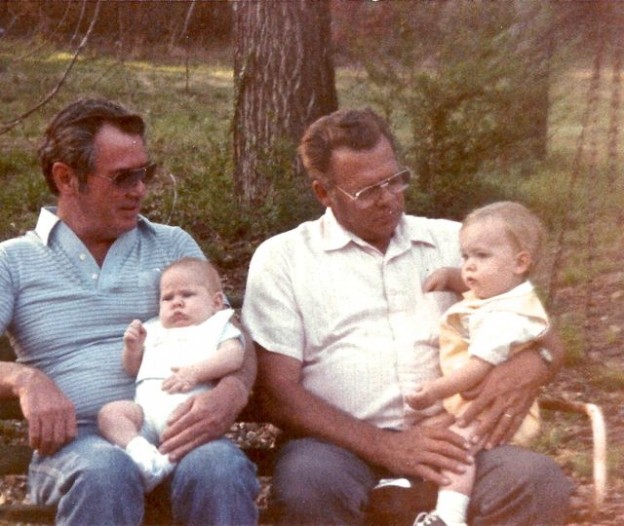 In 1976, while in the 10th grade, my Literature teacher gave us a list of topics to write about in a term paper.  The one I chose was “euthanasia”. It was a fresh topic at the time, due to the case of Karen Ann Quinlan, a 21 year old who was being kept alive on feeding tubes and a respirator after an incident with drugs and alcohol that left her brain-dead. I remember it being a hot topic due to the many different beliefs about how she was being kept alive.  According to the article that I linked above, she eventually died in 1985 after living for 10 years in a coma, while being fed with feeding tubes.

I believe that due to this very high profile case, all of the controversy around Jack Kevorkian and the Terri Shiavo case that lasted from 1990 until 2005, we are now better prepared for the devastating choice of whether to have a living will or not.  Both, Jay and I have a living will with specific instructions of what we want/don’t want in the case of being kept alive by artificial means.  So why is this so important?

It is important to make these decisions ahead of time, so that it isn’t left up to those who will be grieving the loss of their loved one.  I attended the funeral this last week of my uncle.  He was/is the daddy of my dear cousins, David and Rick, and the husband of my favorite aunt.  I love this family and loved my uncle – although I didn’t see him much in his last years.

As David related the story of his dad’s final hours, he told me how his dad’s feeding tube had come out and how my uncle then asked that it not be replaced. I am relieved for my family that he made this decision and they were not asked to do so. My precious aunt, cousins and their children will now go through the difficult stages of grief without the added angst of having had to make that decision.

David and his bride, Christina (who is more like a sister to me), came for a visit the following weekend and while I know it will be hard for days and days to come, they seemed at peace.  Christina, my “adopted sister,” said something to me that has resonated ever since.  We were talking about family and how we didn’t see each other enough. We were also talking about some of the rough patches we have been through with some of our living relatives and this is what she said about that…

“We have to remember the good in our loved ones and forget the bad; we need to learn to love people for who they are.”

This was an easy thing to hear from her, because I believe she has done this her whole life.  She has loved me for who I am without question or judgment. She also directed me to Luke 7 and the story of the woman with the alabaster jar:

36 When one of the Pharisees invited Jesus to have dinner with him, he went to the Pharisee’s house and reclined at the table. 37 A woman in that town who lived a sinful life learned that Jesus was eating at the Pharisee’s house, so she came there with an alabaster jar of perfume. 38 As she stood behind him at his feet weeping, she began to wet his feet with her tears. Then she wiped them with her hair, kissed them and poured perfume on them.

39 When the Pharisee who had invited him saw this, he said to himself, “If this man were a prophet, he would know who is touching him and what kind of woman she is—that she is a sinner.”

40 Jesus answered him, “Simon, I have something to tell you.”

41 “Two people owed money to a certain moneylender. One owed him five hundred denarii,and the other fifty. 42 Neither of them had the money to pay him back, so he forgave the debts of both. Now which of them will love him more?”

43 Simon replied, “I suppose the one who had the bigger debt forgiven.”

“You have judged correctly,” Jesus said.

44 Then he turned toward the woman and said to Simon, “Do you see this woman? I came into your house. You did not give me any water for my feet, but she wet my feet with her tears and wiped them with her hair. 45 You did not give me a kiss, but this woman, from the time I entered, has not stopped kissing my feet. 46 You did not put oil on my head, but she has poured perfume on my feet. 47 Therefore, I tell you, her many sins have been forgiven—as her great love has shown. But whoever has been forgiven little loves little.”

While Jesus was teaching the Pharisee a lesson in being judgmental of “sinners”,  this was a reminder to me that each of us has been forgiven a great debt.  He died for the Pharisee and the “sinner” alike.  I’ve often wondered, however, who was truly the greater sinner in this story? The woman with a past or the man who was so quick to judge her? I noticed that Jesus spent more time counseling the Pharisee than he did the woman.

I couldn’t help but spend some time on verse 43 where Jesus tells Simon that he has “judged correctly.” The lesson I am taking from this scripture is this:

And as we live life preparing our own eulogy, may I add, that just like the woman with the alabaster jar – who was in a sense preparing Jesus’s body for burial with her tears and perfume; that it is a good idea to prepare our bodies in a way that shows the “other-centeredness” kind of love we have for each other – just as Jesus did. We can show our “great love”, just as my uncle did, by making the tough decisions that affect those left behind. 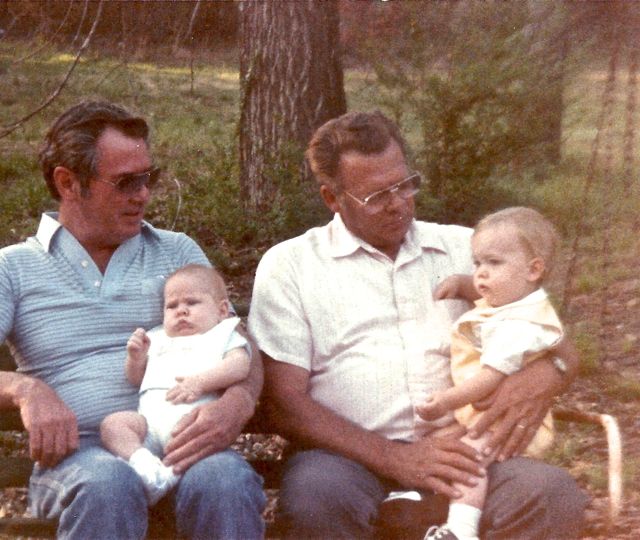 My uncle, J.D. with his grandson, Jared and my daddy with my son, Aaron.

May you rest in peace John D. Morgan.  We appreciate the lessons you taught us in life and in death. You were loved and will be missed.

3 thoughts on “Day 13: Starting Over After a Funeral”