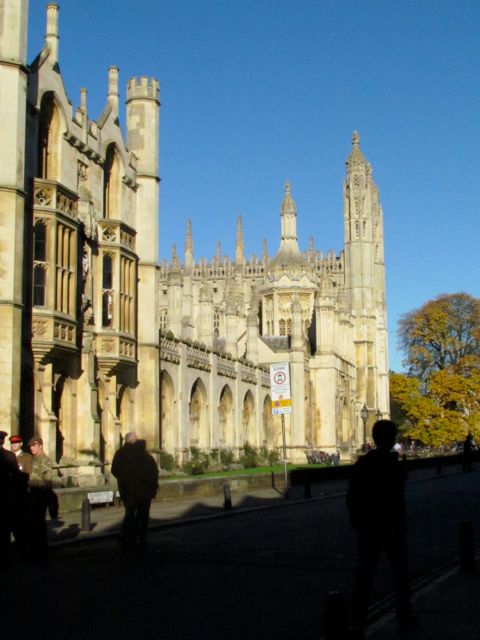 Our third day of touring England led us to the University of Cambridge, the second oldest university in the United Kingdom. As we walked through the cobblestone streets of this campus, it was fun imagining Queen Elizabeth II sitting in a classroom, studying in the library or walking these same streets as the church bells rang overhead.

We heard these bells ringing several times as we walked through the Sunday market.

We enjoyed our shopping. I purchased a sweatshirt and a Polish pottery piece for myself and a few other gifts that are surprises for folks I’ve not seen yet. Shhh.

I wish I could have gotten a better photo of this time piece. It describes perfectly how I feel about time.  It is being eaten up just like a locust eats up the vegetation of our fields. A perfect example is how long I looked forward to this trip and now it’s over.

As we left the grasshopper chomping away at time, we had a traffic diversion due to a truck fire on the highway we had planned to take. Our detour led us through the legendary Sherwood Forest. There is still one remaining tree from the forest, but no definitive answer as to the true identity of Robin Hood.

Once we’d driven through the “forest”, and arrived at our next destination, we had about 2 hours to tour the city of York.

This was the closest thing to a medieval town that we saw.  Some of the wall dates back to Roman Empire days.

Several of the streets were already decorated for Christmas. If you look above the street lamp, you’ll see a small Christmas tree that looks like it’s growing out of the building. There were several of these scattered throughout the village.

It was especially touching to find this Remembrance Day Ceremony awaiting us as we returned to the bus. It was led by a moment of silence and then trumpeters played as poppy wreaths were displayed in honor of fallen or serving soldiers.

After loading the bus, we made a stop at a Moto (a motorway service center) on the way to the hotel. As we departed the bus, Paul was being his usual helpful self, assisting ladies and gents down steps and picking up dropped items. One of our fellow travelers told him, “Paul, you are about as helpful as a pocket on a shirt.” Of course, being southern, we all loved this metaphor and it quickly became a motto for the day.

The day came to a close with a delicious dinner at the Marriott Hotel, followed by a Pinot & PJ Party in Charlotte’s room, aptly named by Trudy. Every day was special and while this one began on the second oldest campus in England, it sure ended on a youthful note. I can’t remember the last PJ Party I attended.