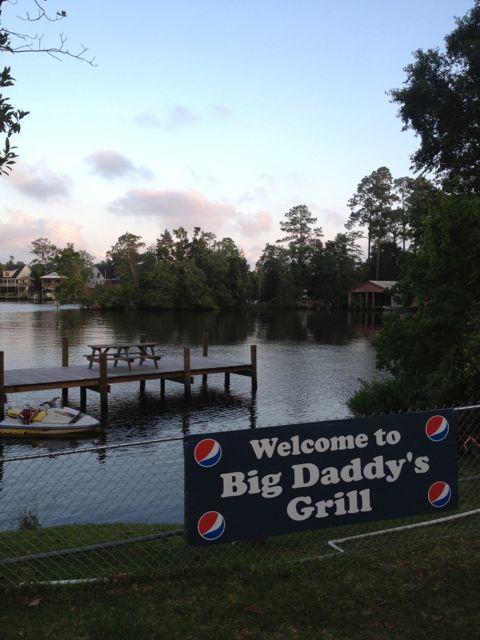 My husband is a foodie. So naturally, I’ve become a foodie right alongside of him. Yesterday was his birthday, so the whole day was his pick of what we did. Big Daddy’s Grill of Fairhope was a must.

I surprised him at his workplace about 11:00 am and his team had ordered a carrot cake to celebrate his 55th. I was so relieved. No baking for me! And it was homemade by the wife of a fellow employee. So very kind of her and delicious!!!! When I walked into his office, his first response was, “Hey, I’m not in a very good mood. We’ve had some bad news this morning!” My response with my arms around his neck, “well, that’s all over now! I’m here and it’s YOUR birthday!!!” His laughter told me that my plan had worked.

We spent the next hour discussing carrot cake, NHL  memories, Olympic curling (the most boring sport on the planet), and plant business with his fellow team members. It was such a fun morning. I was thanked profusely for the change in his mood! 😉

After dessert, at his request, we stopped at the Blue Gill (on the Causeway) for lunch on the way home. We joked that we were having a “two martini lunch,” like they did in the 50’s. Yes, we’ll each have a lemon drop martini, thank you. We stopped because their calendar advertised a certain popular singing group to perform from 12-4. Well, that singer was “out of town.” So, martinis all around!

Then we went home to open his presents. He was thrilled with an antique sail boat and new framed “waterlogue” pictures of him and the kids.

And then, for the final stop of his birthday celebration, we stopped in to one of our favorite restaurants in the Fairhope area. Big Daddy’s Grill, is where the locals go!

We so enjoy Friday nights with Lisa and Vic, affectionately referred to as Lick. They are a singing duo who are both musically talented and very funny as well. In between sets, they tell jokes, advertise (tongue in cheek) for Big Daddy’s and encourage everyone to “take a moment and drink!” Water is Lisa’s preferred drink, so it’s extra funny to the crowd.

This cannot be the motto of my hubby’s day. His was a great day, if I have to take all the credit!

And the most beautiful face of the day….

This was one tired puppy by 7:30 pm, since his day began at 3 am. So this party was home, in pj’s and watching DVR’d Olympics by 8 pm. Yes, we are party animals! But if you are looking for early fun… Big Daddy’s is your place. Lick begins their set about 5 pm.

Happy 55th, Hubby-do! It was another fun day out of the nest!