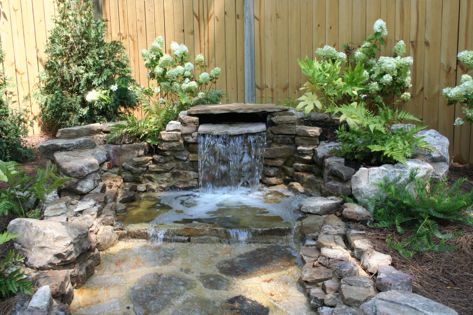 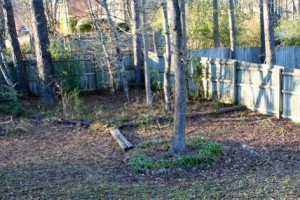 A Backyard for Memories

I’ve known Karen and her family for almost 10 years now.  She is the person I have turned to over and over again when it came to capturing and retaining special memories of my family. She is my Creative Memories consultant. The path that she has taken in her backyard just goes right along with her career.  She has created a space where memories will be made and cherished by all. 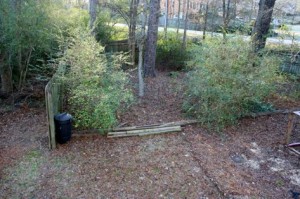 As I was preparing for this feature, I sent Karen a list of questions and here are her replies:

What was your inspiration to start the project?

The backyard was something that we had wanted to improve for a long time, but it never seemed the right time to begin.  When my father passed away in January, my grieving process was to renovate both inside and outside my home.  Neither are completely finished, but the progress we have made so far has been very uplifting for me. 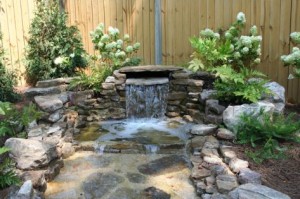 A soothing waterfall when the children are in school. 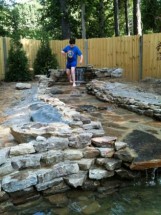 A Water Park after school is out.

What did you salvage or dispose of?

In the backyard, we basically took out everything and started with a clean slate.  We kept only a walnut tree and two small oaks, two flowering shrubs, and the outer shell of the existing fence.  All the trees, brush, and outgrown children’s playthings were removed.  We kept a lot of logs cut from the trees we removed to use in the fire pit.  Although it is a little more work, our kids prefer the natural wood fire. 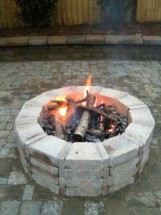 A great place for roasting s’mores.

What plants/grasses did you use?

I asked only that there be blooms or interesting foliage for all four seasons.  My dad always loved a porch swing, so we had one placed under a pergola and the majority of plants alongside form a prayer garden.

What has been the greatest payoff since completion? 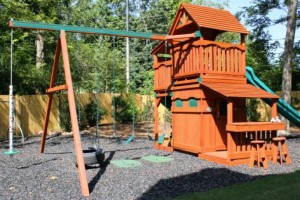 My children have stopped asking to go to the park and the water park.  Now they just go out to their own backyard, which saves me a lot of time.  We have had their friends over several times already for s’mores over the fire pit, volleyball on the lawn, splashing in the wading pool, or just shooting down the rocket slide 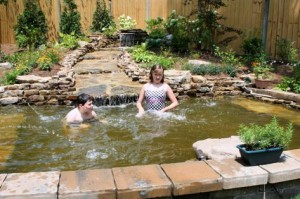 Hannah and Wyatt cool off in their beautiful saltwater wading pool.

Who was landscape architect?

Kudos to Terry Pruitt for a rave redux!!!

While the tragic loss of her father may have prompted them to get this project started, it is just like Karen to turn this into an ongoing memory-maker.  Their family can create memories every minute they spend in this cozy, soothing, yet fun backyard, and at the same time keep the memory of her father living in her prayer garden.  I can imagine a peaceful afternoon in the shade, gently swaying to the rhythm of a breeze with memories of her dad flooding her mind.

I pray it is a balm to her soul.